Hundreds of people in Sweida, a Druze-majority city in southwestern Syria, have taken to the streets for a fifth day to decry corruption and worsening living standards, according to activists.

“We cannot live,” a religious elder at the protest told the crowd. “We want to live in our nation with our dignity and rights for everyone.”

“The regime has made so many flawed decisions that has led to this economic deterioration,” Rayyan Maarouf, of media activist group Sweida 24, told Al Jazeera. “They have not tried to present a solution to all of this.” 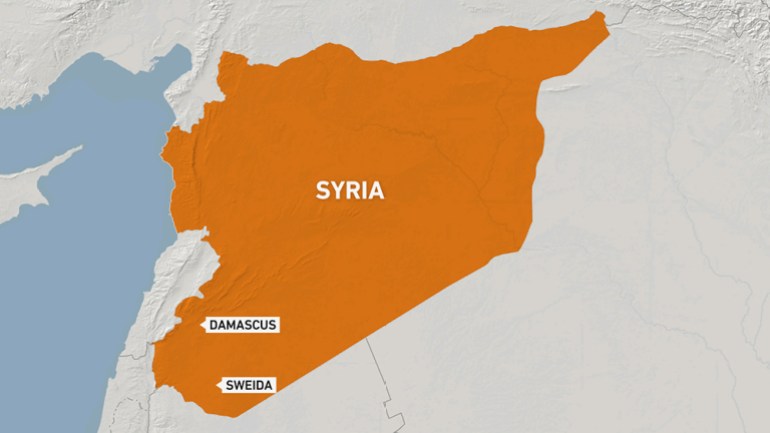 The protests, which are backed by religious elders, follow a decision by the cash-strapped government in early February to drop hundreds of thousands of people from a subsidy programme on essential items, including bread, diesel, cooking gas and petrol.

Over the past week, protesters blocked roads with burning tyres and gathered in the city square, according to social media posts. One of them, a woman attending with her young child, held a loaf of bread on which she had etched the phrase, “There is nothing left for the poor.”

On Friday morning, busloads of armed Syrian security forces reached Sweida from Damascus and other neighbouring cities to patrol the city, according to activists.

“There haven’t been any clashes with the security agencies, but this sends a message to the residents and protesters,” Maarouf said. “It’s a show of force and oppression, by sending out such a large number of security forces, instead of responding to the demands of the street.”

Syrians who lost government subsidies have especially struggled to secure fuel for heating this winter, with reports of families using tree branches and even cow dung to stay warm.

“It’s easy to see why people are doing this, they’ve had enough. They can’t feed themselves, everything is getting more expensive,” Jaber, a law student in Sweida, told Al Jazeera.

“We don’t want to create a huge problem in the country, but we need to eat, to live, and today all the red lines are threatened: bread, heating, gas,” the 21-year-old said.

He noted, however, he would not take part in the protests because he did not expect much to change. “There is no hope, that’s why everyone is leaving [the country],” Jaber said.

Some protesters this week also spoke against key government allies Russia, Iran and Lebanese Shia movement Hezbollah, while others on Friday called for a democratic and inclusive government. Al-Assad last year won a fourth term as president with more than 95 percent of the vote.

The government has not officially commented on the protests. However, Bouthaina Shaaban, a senior adviser to al-Assad, on Monday penned a column for Al-Watan newspaper urging for calm and saying the protests could risk being exploited by Western governments to further ruin the country.

Years of war, the coronavirus pandemic and sanctions continue to batter Syria’s economy. According to the United Nations, 90 percent of the country lives in poverty, while 60 percent are at risk of going hungry.

Amid the economic hardship, al-Assad’s government continues to slash its budget, dropping from about $9bn in 2020 to $5.3bn for 2022.

Syria’s war began in 2011 with a brutal crackdown on anti-government protests. It later turned into a complex battlefield involving foreign armies, local militias and foreign fighters, killing hundreds of thousands of people and forcing millions from their homes.