Qatar Chamber has issued its economic report for 2021 which highlights the trade of private sector according to the certificates of origin issued by the Chamber.

The report, prepared by the Research & Studies Department, said that the value of private sector exports last year increased by 77.2 percent year-on-year to reach QR26.4 billion compared to QR 14.9 billion in 2020 and by 21.7 percent compared to QR 21.7 billion in 2019.

This surge, the report said, confirmed the significant recovery of the private sector activity and Qatar economy in general from the implications of the Covid-19 pandemic, as it reached to levels better than those before the application of precautionary measures. 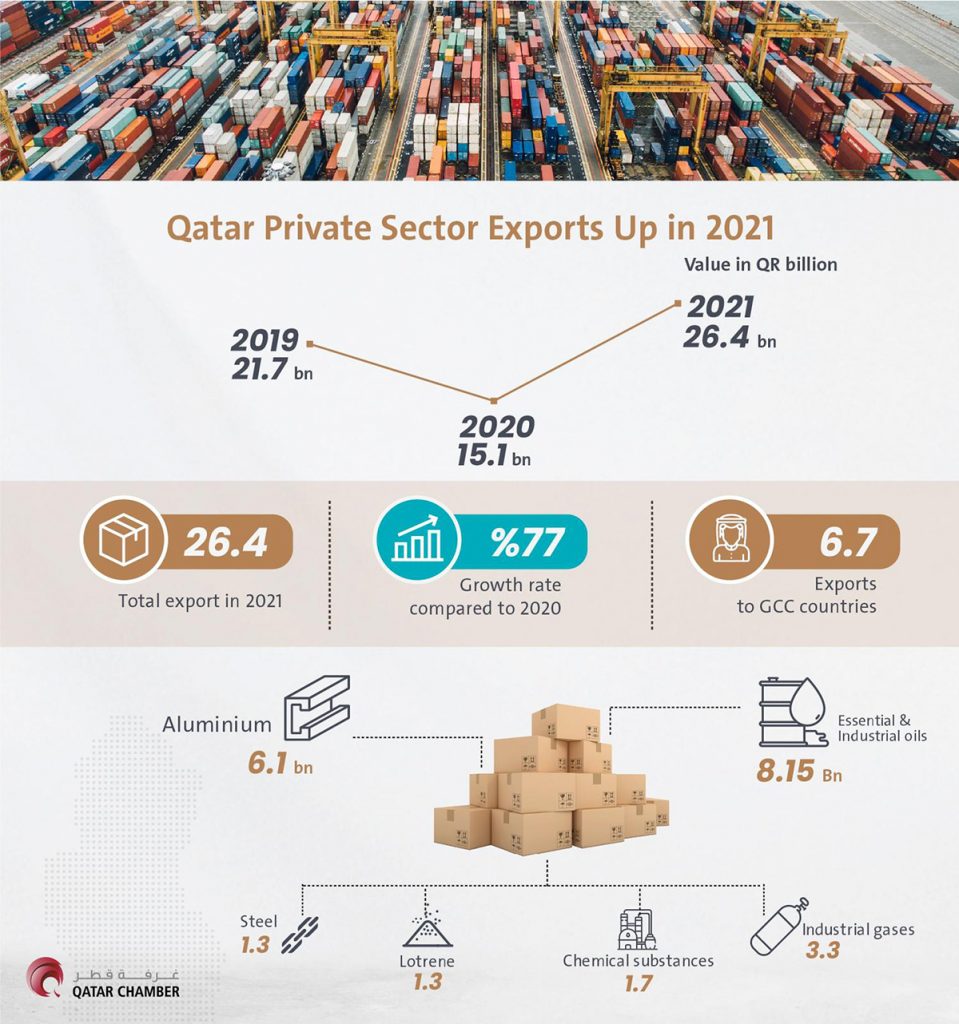 Type of commodities
The report indicated that the value of exports of eight commodities recorded growth compared to their values in 2019 and 2020, while the sole exports that decreased are the petrochemicals exports.

This surge in 2021 foreign trade is mainly due to the increase of exports which rose by 69.31 percent and imports which grew 8.65 percent compared to 2020. When comparing with 2019, exports increased by 19.56 percent, while imports declined by 3.80 percent.

The report pointed out that the year 2021 witnessed a steady growth in all foreign trade indicators linked to the trade balance based on the quarterly analysis of data.

According to figures of The Planning and Statistics Authority for 2021, the total value of foreign trade increased in Q2 by 8.7 percent compared to Q1 because of the 10.8 percent increase of exports during the said period, with a slight increase in the value of imports which grew by 3.1 percent.

Similarly, the total value of foreign trade increased in Q3 by 12.2 percent compared to Q2 because of the 16.5 percent increase in the value of exports, while the value of imports declined by 0.1 percent.

Major trade partners
In 2021, Asia was the principal destination of Qatar’s exports and the first origin of Qatar’s imports in 2021 amounted to QR 278.3 billion, followed by the EU with total value of trade amounted to QR 70.6 billion.

In third place came the GCC states, with trade totaling QR 25.1 million, followed by the USA with trade amounted to 18.4 billion, and Other American Countries with trade value amounted to QR 7.5 billion.

In 2021, China was at the top of the countries of destination of Qatar’s foreign trade with about QR 65,874 billion, a share of 15.7 percent of the state’s total foreign trade.