Johannesburg, South Africa – South Africa is facing its worst unrest in decades as protests over the jailing of former President Jacob Zuma have led to spiralling violence and looting.

At least 72 people have died in six consecutive days of violent clashes between police and protesters and in stampedes by looting mobs. More than 1,200 people have been arrested so far.

What initially started as a protest against the jailing of Zuma on Friday for contempt of court has mushroomed into grievances over inequality and poverty that have rocked the country.

President Cyril Ramaphosa has deployed 2,500 soldiers to Gauteng and Kwazulu-Natal, the two provincial epicentres of the unrest, to aid police that have been largely outnumbered and unable to deal with the unfolding chaos.

“Communities left behind in the world’s most unequal society feel angered by the system and are lashing out,” Professor Mcebisi Ndletyana, a political analyst, told Al Jazeera.

“This anger has been bubbling below the surface for decades and we might be experiencing a revolution of the poor that is being taken advantage of by criminals who benefit from the revolt and unrest.”

Thousands of businesses have been ransacked or forced to close their doors for fear of violence.

“We are not open because we will be looted of equipment that took us decades to afford and my staff of 14 must stay at home until its safe,” Humphrey Jeffries*, owner of a trucking components business in the Johannesburg Central Business District, told Al Jazeera.

“After 48 years of being in business, we face the real prospect of lay-offs and even closure now. We managed to get through the initial COVID-19 madness of lockdowns but this is too much now.”

So far 200 malls and shopping centres countrywide have been forced to close by the violence, with everything from food supplies and medicines to flat-screen TVs and clothing being carried off during the looting.

Jabulani Mall in Soweto, the country’s biggest township, has been completely gutted by looting and vandalism. Business owners tried to rescue the little stock left behind under the watchful eye of security forces, who were just managing to keep protesting crowds at bay.

“But even if the president does do that, [looting] will carry on because we are hungry too and need things to survive.”

The South African economy had rebounded somewhat since the onset of COVID-19 with gross domestic product (GDP) growth predicted to be up to 3.1 percent in 2021 by the nation’s treasury.

But unemployment has grown to more than 32 percent in a society classified as one of the most unequal in the world, with a Gini-Coefficient of 63 and more than half the population living in poverty.

The country’s economic recovery has also been compromised by yet another lockdown as South Africa battles a third wave of the coronavirus that has seen more than 2,500 deaths in the past week alone.

“People are under a lot of pressure and crime and lawlessness has always been a risk in the South African economy,” economist Xhanti Payi told Al Jazeera.

“But this kind of instability cripples any attempt to reconstruct this economy for the benefit of all and the poorest of the poor will lose the most from this with more job losses and government finances unable to support people joining the poverty line.” 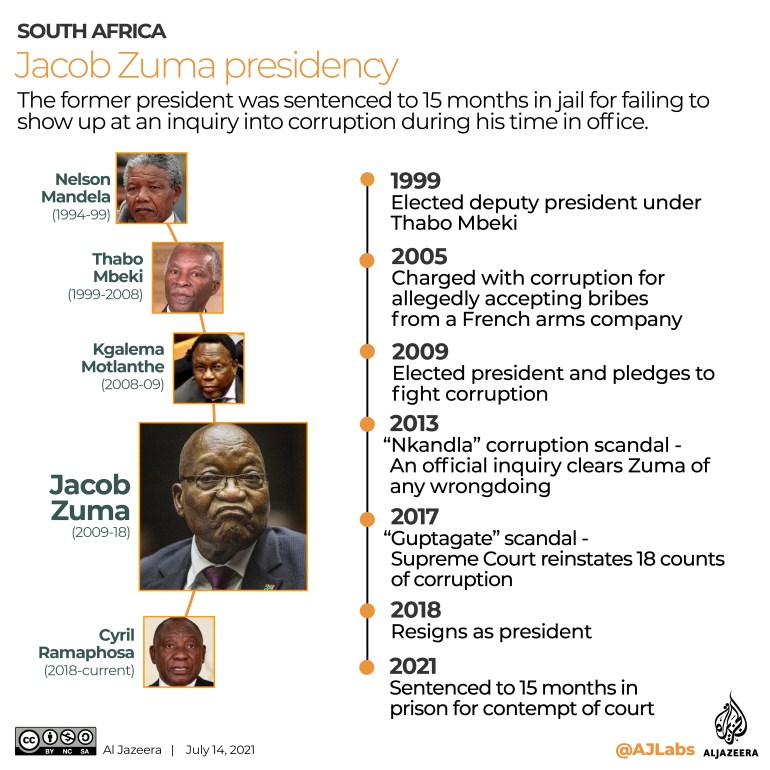 Even after the armed forces’ deployment, unrest continues to rage and has now spread to the Northern Cape and Mpumalanga provinces.

With the country’s logistical supply chains fast becoming affected, fuel, food and medicine shortages are now predicted to be only days away.

Security analyst Helmoed Heitman told Al Jazeera that while the unrest was partly explained as actions of a desperate populace living in poverty, it was also spurred by political opportunism.

“There’s two sides to this: a mass of people with no hope of a future and very little to lose by protesting and looting, alongside a political clash over the future of the country as those aligned with former President Jacob Zuma stand to benefit from the violence and breakdown of law and order.”

*Name changed for fear of being targeted by protesters.

Why are Muslim women living ‘in fear’ in this Canadian city? | Islamophobia News

What is really behind the crisis in Haiti? | Latin America