An alarming flare-up in coronavirus cases in Iran has raised fresh fears of a broad COVID-19 resurgence, sparking official warnings of new restrictions and underlining the sanctions-battered country’s challenge of returning to post-virus normality.

Since June 1, the number of new COVID-19 infections has been hovering near or above 3,000, reaching on Thursday its highest-ever daily total: 3,574.

While Bagheri acknowledged that a factor behind the jump was an increase in coronavirus testing, she noted that another reason was that “some don’t take it [the pandemic] seriously anymore” as fewer people seem to strictly obey physical distancing rules and avoid long-distance travel.

According to a poll cited last week by Deputy Health Minister Iraj Harirchi, public belief in physical distancing has dropped from 90 percent to 40 percent, while trust in stay-at-home orders has also slumped, from 86 percent to 32 percent.

Calling the findings “a disaster”, Harirchi has been just one of several government officials in recent days to rebuke the public for ignoring public health advice including maintaining physical distancing and wearing masks in public.

“People seem to think the coronavirus is over,” Health Minister Saeed Namaki said during a news conference on Tuesday. “The outbreak is not over yet, and at any moment it may come back stronger than before.”

A day later, it was time for President Hassan Rouhani to warn Iranians to “seriously take into consideration” the possibility of a resurgence of the disease that would force authorities “to bring back some of the restrictions” previously imposed to slow the spread of coronavirus – a move, he said, that would affect “the normal life of citizens and badly harm the economy”. 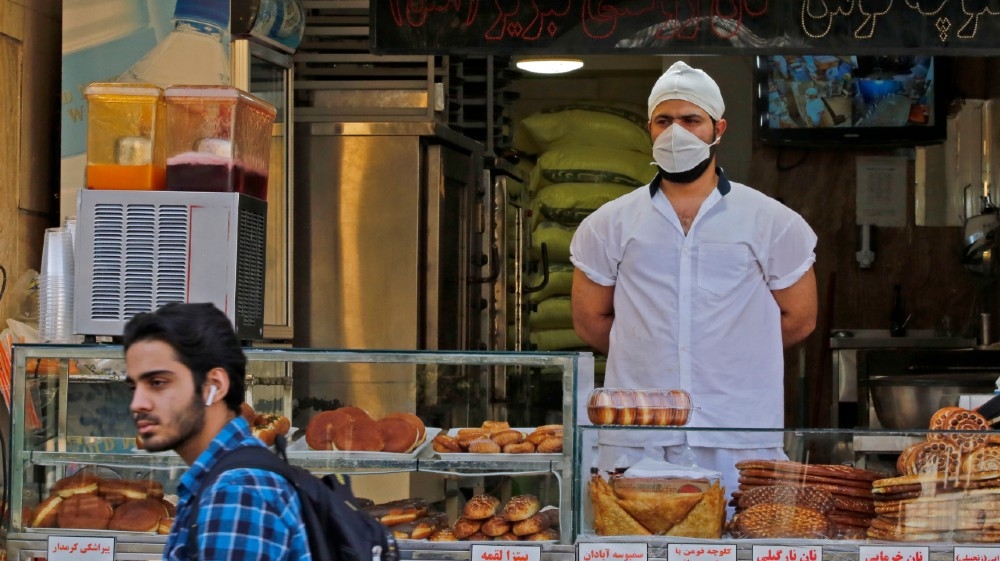 In the past two weeks, the number of daily new deaths has remained below the hundreds [AFP]

However, some argued that people’s behaviour was not to blame for the recent surge in infections.

“This is 100 percent due to wrong policies,” said Kamiar Alaei, an expert on Iran’s public health and president of the Institute for International Health and Education in Albany, New York.

“There is no coordination between the trend of infections and the government’s decision-making,” he added. The doctor explained that “a new peak is inevitable” every time restrictions are lifted without a steady and constant decrease in the number of infections for two weeks.

On May 12, mosques across the country were temporarily allowed to reopen for three days to celebrate the nights of Laylat al-Qadr for the Muslim fasting month of Ramadan. Some took the chance to travel on that weekend. From May 25 to June 1, the number of hospitalisations rose from 338 to 652, and fatalities from 34 to 84, according to the health ministry.

While the epicentres of the Iranian outbreak were originally the capital, Tehran, and the central city of Qom, one of the so-called “red zones” currently is the western province of Khuzestan, where the number of people infected with COVID-19 is “steadily increasing”, according to officials.

“The increase in patients with coronavirus in Khuzestan shows that this province is still in a worrying situation,” Qasem Jan Babaei, also a deputy health minister, said on Thursday.

Iran was one of the first countries to be hit hard by an outbreak of the new coronavirus following the emergence of the highly contagious pathogen in China late last year.

On February 19, Iranian authorities announced that two elderly people had died after testing positive for coronavirus. The pair were the country’s first cases, and only the seventh and eighth fatalities caused by the virus outside mainland China. Since then, COVID-19 has infected more than 167,000 people and caused 8,143 deaths – even though there have been suggestions that the actual figures are much higher.

With Iran swiftly becoming one of the pandemic’s hot spots in the Middle East, the government in March announced a series of containment measures including ordering the closure of non-essential businesses and banning intercity travel. Schools and universities were also shut, while religious, cultural and sporting events were banned.

But as the number of daily cases began to wane in early April, following a peak in late March, authorities began rolling back restrictions amid concerns that extended curbs on economic life activity were not sustainable in an economy already squeezed from punishing United States sanctions.

Bazaars and shopping centres in certain areas were allowed to reopen, while travel between provinces was eased.

As the country continued its efforts to contain the disease while also striving to revive its economy, most restrictions on business activity were removed and mosques were allowed to reopen by the end of May, even as the number of infections began rising again.

“By telling the people to go back to work and that the outbreak was under control, the government sent the wrong message and it undermined the significance of the outbreak,” Alaei argued.

In the past two weeks, the number of daily new deaths has remained below the hundreds, ranging from 34 on May 25 to 81 on June 1. In the past 24 hours, Iran reported 63 deaths. The highest number of daily fatalities was 158 on April 4.

Looking ahead, the prospect of another shutdown has not been greeted well by those struggling to make ends meet.

“President Rouhani is living on ‘Easy Street’, he is not thinking about us young Iranians,” Amin Rezaie, a barista in Tehran, told Al Jazeera. “I am 31 and I have nothing of my own. No car, no flat, not even a motorbike.”

But according to Ebrahim Mohseni, economist and senior analyst at the University of Tehran’s Center for Public Opinion Research, the government, at most, could shut down schools, mosques and recreational centres – but not touch businesses and economic activities.

“Most agree that the economic impact of any major shutdown would be more than what the coronavirus could cause for a relatively young population of Iran,” he said.

'No time to take foot off pedal' - WHO: Coronavirus live updates | News