The investments are predominantly funded with debt, resulting in elevated leverage which has “understandably caused concerns about the Group as a whole,” said the report which was released on Tuesday. “In the worst-case scenario, overly ambitious debt-funded growth plans could eventually spiral into a enormous debt trap, and possibly culminate into a distressed situation or default of one or more group companies,” the authors warned.

Adani is the fourth-richest person in the world according to Forbes magazine which has valued his fortune at $137.6bn. He founded the group as a commodity trading business in 1988 and expanded rapidly across key industries such as energy, utilities and transportation.

However, the past few years have seen the group expand existing businesses and add-on businesses in new sectors, all predominantly funded by debt.

For instance, Adani Group acquired the Haifa port in Israel in July for $1.2bn and Swiss firm Holcim’s Indian cement units for $10.5bn in May, besides almost three dozen big and small acquisitions. It is also expanding into media, healthcare and digital services.

“We see little evidence of promoter equity capital injections into the group companies, which we feel is needed to reduce leverage in their stretched balance sheets,” the report said adding that “excessive debt” and over-leveraging by the group could have a cascading negative effect on the credit quality of the bond-issuing entities within the group. That, it said, “heightens contagion risk in case any entity falls into distress.”

A spokesperson for the Adani Group did not immediately reply to a request for comment. All seven listed Adani firms declined by 2 percent to 7 percent in trading on Tuesday. 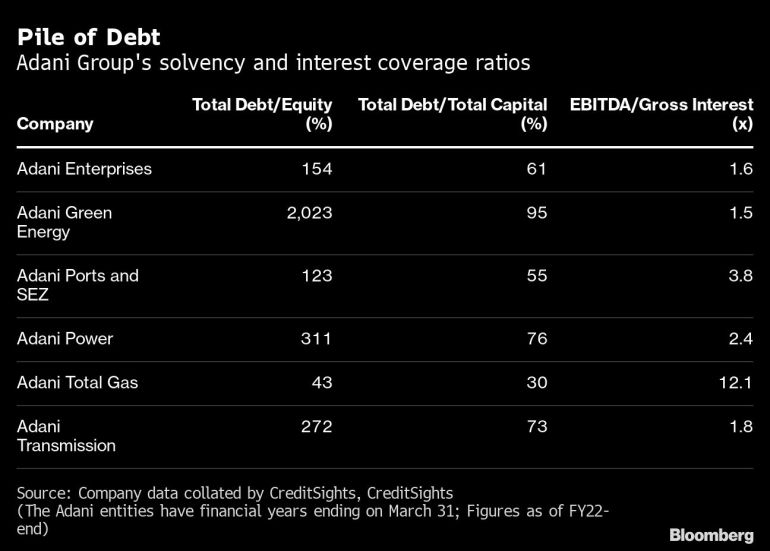 Investors have cheered the tycoon’s ability to rapidly scale up his businesses, spurring enormous share rallies in Adani firms even during the pandemic, when most businesses suffered. Adani Enterprises and Adani Green Energy Ltd have surged more than 1,300 percent since the beginning of 2020. Adani Total Gas Ltd has rallied about 1,900 percent and Adani Transmission Ltd more than 900 percent, while the benchmark S&P BSE Sensex surged almost 42 percent over this period.

But in its report the agency said that the family’s wealth is largely “paper wealth” tied to the shares held in the business. And despite thatlarge net worth, “it is difficult to predict the extent of the promoter’s capacity to continually provide liquidity support due to potential contagion risk to the whole Group in the event of one or more group companies falling into distress,” the report said. In India founders of companies are known as promoters.

The report also flagged how the group is increasingly getting into a position where it will compete with Reliance Industries, India’s largest conglomerate which is helmed by the country’s second-richest person, Mukesh Ambani, who Adani recently dethroned.

As the two mega-conglomerates in the Indian corporate sector compete for market share in a few new economy businesses including renewable power and telecom, “it could lead to some imprudent financial decisions from both sides, such as higher capex spends, aggressive bidding, and over leveraging,” the report said.

But the analysts took comfort in the fact that the Adani Group enjoys solid banking relationships with domestic and foreign banks and that Adani himself “enjoys healthy relations with the ruling Modi administration” and “at the minimum, this ensures no impediments to the Adani Group growth agenda.”

Since the group has a “strong track record of churning out strong and stable companies” through its flagship, Adani Enterprises Ltd, and has built a portfolio of “stable infrastructure assets tied to the healthy functioning” of the Indian economy, the analysts said they were “cautiously watchful” of the group’s expansion appetite which is largely “debt-funded”.