It has been four years since Rodrigo Duterte took his oath as president of the Philippines, railing against the “erosion of faith and trust in government”, while riding on a populist wave by promising “real change” and “transparency” to the country of more than 100 million people.

But as he enters his last two years in office, Duterte’s leadership has proven hollow, analysts have said, adding that his handling of the continuing coronavirus pandemic has exposed his lack of serious policy, leaving many Filipinos to fend for themselves even as the economy faces its most serious challenge in decades.

From his war on drugs that killed thousands, to the deadly siege by ISIL-inspired fighters in the city of Marawi, and the current health emergency that already infected 36,000 people and killed more than 1,250 others, Duterte has relied on “militarist” approach to every major crisis he faced, even if it is not working, observers added.

Sonny Africa, executive director of the independent think-tank, IBON Foundation, said fixing the political and economic damage that Duterte has wrought in the last four years “is already a daunting task”.

“It’s scary what another two years will do,” Africa told Al Jazeera, as he warned that the Philippines “is in the worst crisis of joblessness and collapsing household incomes in its history”.

Africa, a London School of Economics-trained development expert, said that instead of addressing basic fiscal and economic reforms – such as social protection, free land distribution and the reversal of a “regressive” tax system – Duterte’s economic managers are continuing with business as usual.

“The government’s policies are not working because the self-serving political agenda and interests of economic elites are given priority over rational public health and socioeconomic relief,” he said.

If anything, the president “is opportunistically exploiting the pandemic” in advancing a political and economic agenda that shows “undue bias” for big business, cronies and foreign investors, Africa added.

Duterte has defended his policies by saying that he is “looking after the welfare” of the Filipinos, and telling them to “stop blaming the government, because the coronavirus is already here.”

He also said that he will “bet his reputation” that there are no anomalies in the government’s handling of the health crisis.

Looking towards the fourth full year of the Duterte administration, the nation remains at odds with the pandemic in terms of medical and economic solutions. We are in the same quandary but in a worse manner than we were in when Duterte’s term began. #TheRealDuterteLegacy pic.twitter.com/ekUNH0Pm5r

Richard Heydarian, a Manila-based political science professor and analyst, noted that the pandemic “has exposed the hollowness of right-wing populism”, citing Duterte as an example, while comparing him to US President Donald Trump and Brazil’s Jair Bolsonaro.

The US and Brazil lead the world in both confirmed cases and fatalities.

“If you look at the worst cases around the world … all of these countries have been under the spell of one form of populism or another,” he told Al Jazeera.

In the case of the Philippines, the spread of the disease, also known as COVID-19, had been a “double-edged sword” for Duterte, said Heydarian, who is author of the book, The Rise of Duterte – A Populist Revolt Against Elite Democracy. 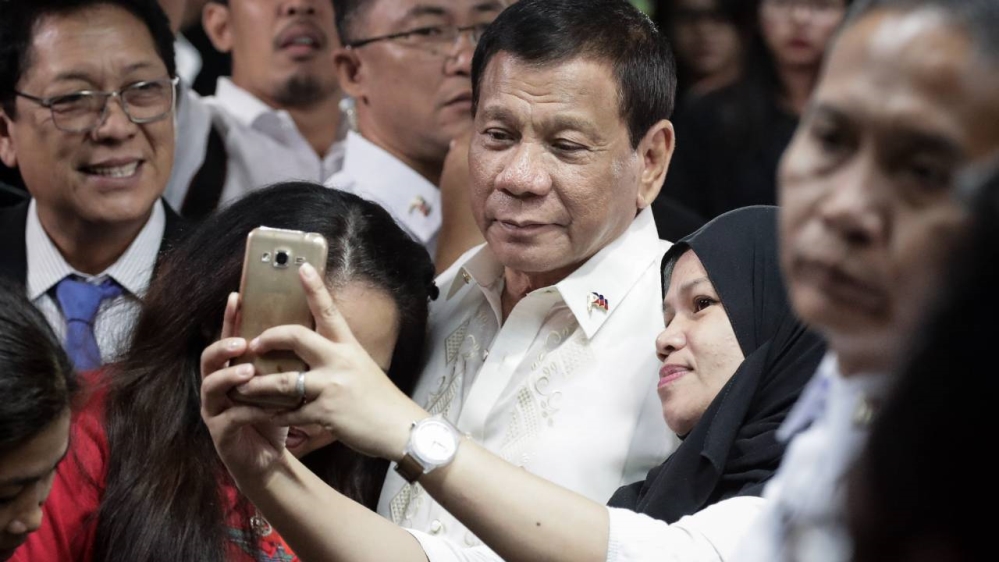 Before the pandemic and the resulting lockdown, about 81 percent of people surveyed said that they were satisfied with the Duterte administration [File: Mark R Cristino/EPA]

In late January, some health experts and the opposition, including Vice President Leni Robredo, were urging Duterte to immediately impose a travel ban of visitors from the Chinese city of Wuhan, where the infection was first reported.

Even after the first coronavirus death outside China was reported in the Philippines on February 2, Duterte resisted ordering flight restrictions, saying it could damage Manila’s diplomatic ties with Beijing. He also joked that he would “slap the coronavirus” in the face.

A travel ban was only imposed in mid-March, alongside a virtual nationwide lockdown that affected the livelihood of millions of Filipinos. A national health emergency was also declared.

While those delays undermined Duterte’s portrayal of himself “as a decisive and effective leader”, the pandemic has provided the president with “the leeway and legal emergency powers” to launch an “authoritarian blitzkrieg”, according to Heydarian.

He noted that the closure of ABS-CBN, the country’s largest media network, as well as the cyber-libel conviction of Rappler journalist and executive editor, Maria Ressa, happened just months after Duterte secured emergency powers to deal with the spread of the coronavirus.

“Clearly, we see the populists, particularly in fledgeling democracies like the Philippines, exploiting and leveraging the ongoing emergency situation to muzzle and intimidate the opposition and voices in independent media,” Heydarian said.

Before the coronavirus lockdown, however, at least 81 percent of survey respondents said that they were satisfied with the administration of President Duterte, according to the polling firm, Social Weather Station. 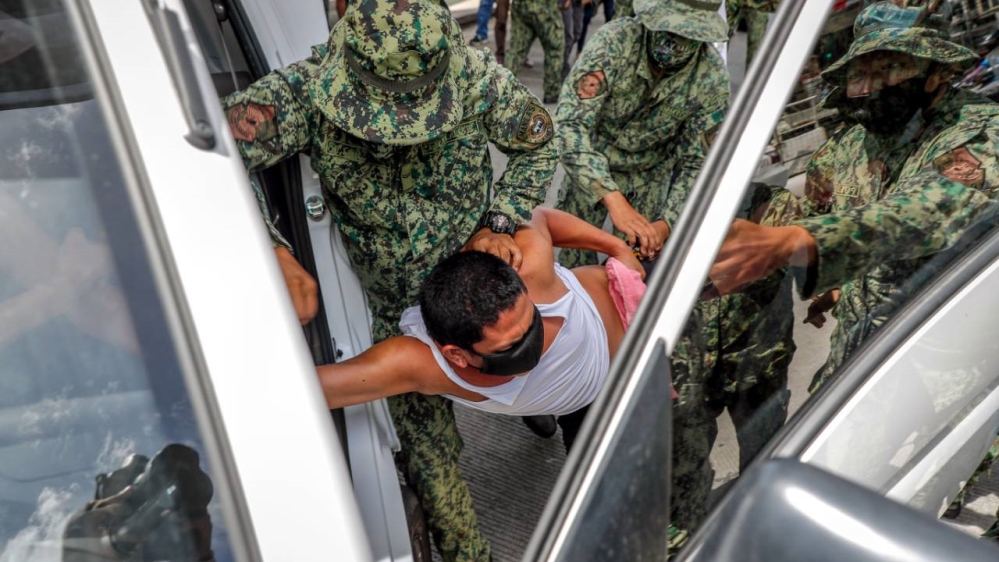 According to the police, more than 61,000 people were arrested in the Philippines during the lockdown imposed to curb the spread of the coronavirus [File: Mark R Cristino/EPA]

But Heydarian warned an impending dip in the economy due to the pandemic could “seriously hurt” Duterte’s standing among the public.

Africa of IBON Foundation, one of the oldest non-profit research organisations in the Philippines, said “the militarist response” of the Duterte administration “bolsters its authoritarianism”.

It was also during the lockdown that the allies of the president in Congress managed to push through the anti-terror bill, which allows warrantless arrests and longer detentions without charge. Critics have warned that it could be exploited by the government to go after its critics.

Nowhere is the unravelling of Duterte’s policy more apparent than in the southern city of Marawi, which came under siege by armed fighters that pledged allegiance to the ISIL (ISIS) group in 2017, said Drieza Abato Lininding, a Marawi community leader.

He said more than three years after the attack, tens of thousands of people remain displaced and are unable to return to their homes despite the president’s repeated promises. Marawi is also now struggling to contain the spread of coronavirus in evacuation camps.

Lininding pronounced Duterte’s policies as a “big fail”, despite the passage of the Bangsamoro autonomous government, saying that “the poor are getting poorer, and some of those well-to-do families are suffering as well.” 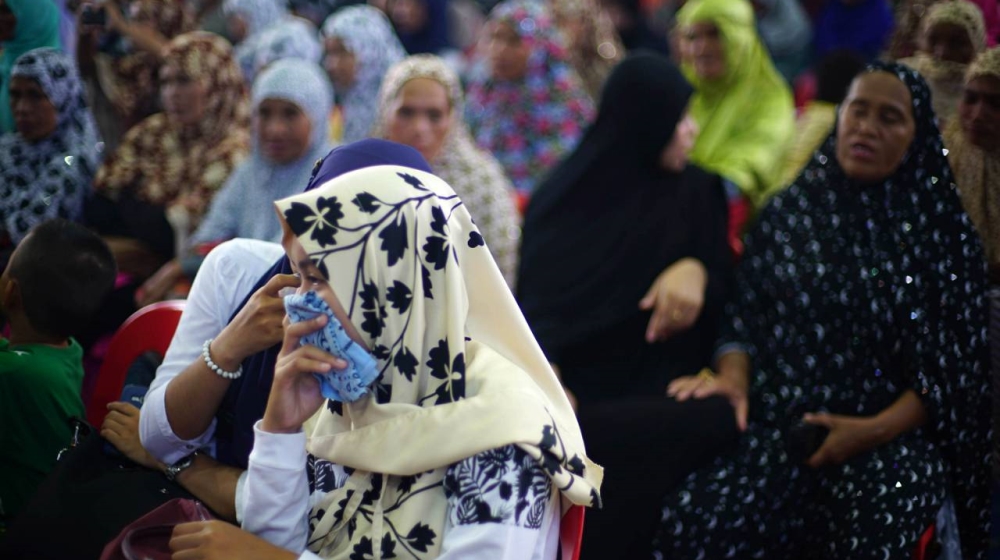 Three years after the siege, tens of thousands of Marawi residents remain in refugee camps, which are now struggling to contain the spread of the coronavirus [File: Linus Escandor II/EPA]

“Corruption is rampant, and worst not only in Moro areas, but in the whole island of Mindanao,” he told Al Jazeera.

He said among the “bad legacies” left by Duterte is his “too much pampering and relying on the military and police that lead to abuses”.

In a statement to Al Jazeera, Cristina Palabay, secretary general of the activist group Karapatan (Right), said that Duterte’s four years in power has ben “an epidemic of State terrorism, blatant injustice and gross rights violations.”

On Monday, Harry Roque, the palace spokesman, defended Duterte saying that in the moment of a health emergency, the president has one one message – “Stop politics”, adding that the government is “doing its best” to handle to situation.

Even after Duterte has completed with his term as president – in the Philippines, the president is allowed to serve only a single term – Africa of IBON Foundation, is concerned about the problems that may be left behind, including a record amount of debt.

“The government was set to borrow a record 1.4 trillion pesos ($26.1bn) in 2020 even before the pandemic. If anything, COVID-19 even gives it a convenient cover for this,” he said.

Africa noted that majority of the borrowing is for infrastructure projects that are “unlikely to be financially and economically viable, amid the changed conditions of pandemic-driven recessions”.

“Its so-called ‘recovery programme’ is a mere recycling of the same economic policies before the pandemic and are more inappropriate than ever.”

“The dependence on debt to drive the economy was questionable before and is only more so now.”