Gaza City – During last year’s Israeli offensive in Gaza, Imadeldin Abed’s apartment became a refuge for 13 people, gathering to try and avoid the bombs falling on the besieged Palestinian territory.

But on May 17, 2021, Abed said he received a phone call from an Israeli army intelligence officer, telling him his home was about to be targeted.

The apartment, in central Gaza City, was destroyed in the subsequent Israeli air attack.

At the time he received the call, Abed had been combing through the rubble of a relative’s home, which had been bombed, leaving dozens of civilians dead.

“I didn’t expect it would happen immediately to my home,” Abed told Al Jazeera.

“The Israeli officer told me that we should evacuate our building within 15 minutes. The officer stressed it was forbidden to take any of our things or furniture. We just ran out as we were.”

In May 2021, Israel launched a devastating 11-day military offensive on the blockaded Gaza Strip, the fourth major offensive launched by Israel on the Palestinian territory in 14 years.

The assault killed at least 261 people, including 67 children, and wounded more than 2,200, according to the United Nations.

Tel Aviv says the offensive was a justified response to rockets and other projectiles fired from the Gaza Strip and puts the blame on the territory’s rulers, Hamas.

Over the course of the conflict, rockets fired from Gaza killed 13 people in Israel.

Since the attack, Abed and his family have moved into a rented apartment with his married sons.

“We started our life from scratch. My apartment, and the apartments of my married sons, all of that disappeared in moments,” Abed explained.

“Here we are without furniture, clothes, or money. Everything was destroyed.”

The apartment Abed currently lives in is small and overcrowded, and he says that he has not received any help from international or governmental organisations.

“Over the past year, we have received many promises of reconstruction from the UNRWA and the United Nations to no avail,” said Abed, who is a government employee. “Equipping my apartment costed me about $80,000 and, in seconds, it evaporated in front of me.”

For Abed that loss has been difficult to contend with.

“We aren’t to blame for the war. We want our homes to be reconstructed as soon as possible. Enough of what is happening to us in the Gaza Strip,” Abed said. 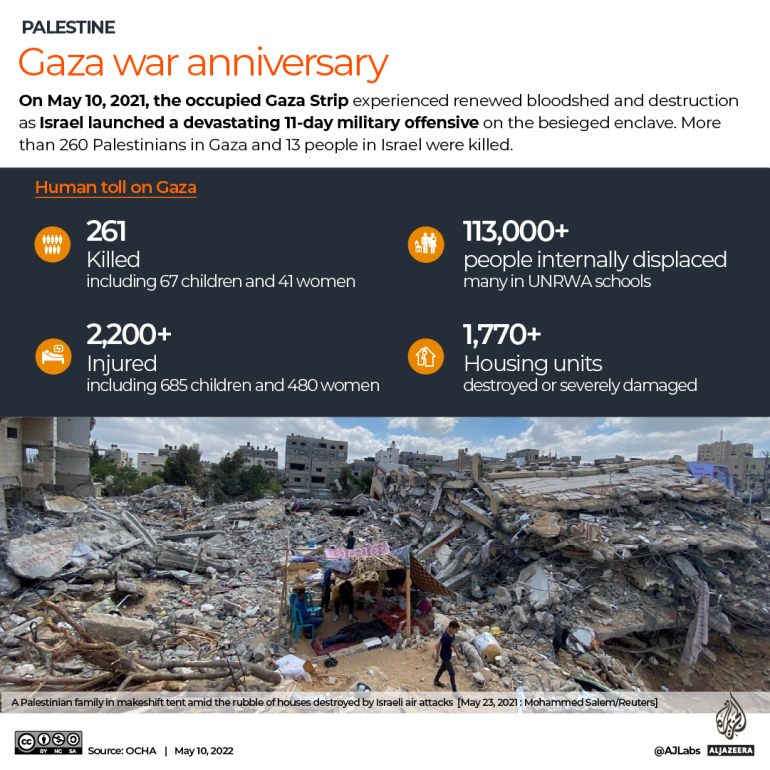 Others in Gaza have had to deal with not just the material effects of the war, but the physical ones too.

“I heard the moan of my brother Ahmed, who is two years older than me,” el-Sayed said. “I tried to remove the rubble above him to save him, but I couldn’t until the ambulance came and pulled him out.”

Ahmed’s condition was very serious. The bombing left him paralysed, unable to move his left hand. He also suffers from a laceration of the spinal cord.

“War created disasters in our lives, we were safe in our home, and suddenly we found ourselves injured and wounded, and we lost our home in moments,” el-Sayed said.

He explained that his father, Rashad, had spent five years preparing and furnishing their apartment.

“We only lived there for three years. Now, my father lost the house in which he put all his savings, as well as my brother, who lost the ability to move while he is still in the prime of his youth,” el-Sayed added.

“We live now in a rented house, which is not healthy for my brother. He does not have a private room that fits his special health condition, and there is no hope for future reconstruction.”

Like many in Gaza, el-Sayed complained that, despite promises and pledges, few reconstruction projects had been implemented.

“Last year was tough for everyone, we no longer have hope that things will improve,” el-Sayed said. “Gaza is completely forgotten.”

The offensive last May was marked by its intensity, and the destruction of civilian homes and infrastructure.

Approximately 1,770 homes were destroyed or partially destroyed, according to the United Nations. In addition, another 22,000 units were damaged, resulting in the displacement of tens of thousands of Palestinians, according to authorities in Gaza. At least four high-rise buildings were levelled, and 74 public structures were also hit.

Naji Sarhan, under-secretary of Gaza’s Ministry of Public Works, told Al Jazeera he was frustrated at the delay in reconstructing Gaza.

“Unfortunately, a year has passed since the May offensive, though the process of reconstruction is still at the beginning,” Sarhan said.

According to him, only 200 housing units had been rebuilt, out of 1,700 units that were completely destroyed.

The situation was better when it came to partially destroyed housing units, with Sarhan saying that 70 percent had been rebuilt, while the rest needed additional funding.

According to Sarhan, the losses in the recent offensive are estimated at $497m, with $160m needed to rebuild the damaged or destroyed homes.

“The 14-year Israeli-Egyptian blockade on the Strip has imposed many obstacles on the reconstruction process,” Sarhan said. “Israel bans building materials coming through its border crossings, resulting in worsening living circumstances for Palestinians in Gaza.”

Sarhan added that there are approximately 1,300 severely damaged housing units and 70,000 with some damage to them whose construction has not been financed since the 2014 war.

However, despite that need, only Egypt and Qatar have pledged to support the reconstruction process, promising $500m each.

Israel did agree to remove restrictions on the entry of building materials into Gaza last August, but officials in Gaza argue that Israel continues to pressure donors to not fund reconstruction projects.

Sarhan, however, also pinned some of the responsibility on the UN, and specifically its Palestinian refugee agency, UNRWA.

On April 25, dozens of Palestinians in Gaza protested in front of the UNRWA headquarters, accusing the agency of not fulfilling its duty to rebuild Palestinian homes destroyed in the 2021 and 2014 wars, as well as demanding that UNRWA Commissioner-General Philip Lazzarini retract his recent request that UNRWA projects be transferred to other international networks and institutions.

In turn, UNRWA responded in a statement that it had completed the rebuilding of “partially damaged houses,” and explained that it would begin to rebuild the completely damaged houses “within a week”.

For Sarhan, that is not enough.

“We call on UNRWA and all parties to abide by their commitments to reconstruct the Gaza Strip,” he said. “Life has completely halted in the Strip and people are in dire need of assistance, and to have their homes rebuilt.”